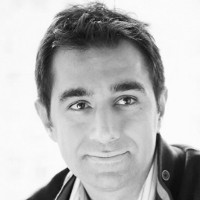 Dr. Hossein Rahnama is the Research and Innovation Director of Toronto Metropolitan University's (formerly Ryerson's) Digital Media Zone (DMZ). Hossein leads the DMZ’s research and innovation arm, facilitating and encouraging industry partnerships with DMZ companies and teams while contributing to scientific discovery and dissemination. He is also the CEO Flybits, a spin-off company from Toronto Metropolitan University and MaRS Innovation focusing on context-aware computing. Hossein has been at Toronto Metropolitan University for more than a decade, starting with his undergraduate degree and staying through to complete his doctoral degree and postdoctoral work. This long association with Toronto Metropolitan has given him a deep understanding of the university system, including the academic and scientific research process, which has been invaluable to the DMZ’s development. A man who wears many hats, Hossein is also the Research Director of the Ubiquitous Computing Group at Toronto Metropolitan, and an Associate Professor in The Creative School. He is an advocate for Canadian-European research collaborations in the Information and Communications Technology (ICT) sector, having completed collaborations with more than 14 industry partners across Europe, including close relations with companies in Sweden and Norway. In the DMZ, Hossein conducts research that combines context-aware computing, artificial intelligence, and opportunistic social networking. With special interests in the transit, transport and security industries, Hossein’s Flybits team specializes in mobile software solutions that respond to situational factors and personal information. Their goal is to use mobile devices to enhance interpersonal communications while conserving power and energy. In 2010, the Flybits team under Hossein’s direction launched the Mobile Transit Companion for the Paris Metro Authority (RATP) in collaborations with the European Commission’s framework program. This mobile solution provides passengers in transit with live, customized, useful data at their fingertips. The solution was developed as one piece of a larger research consortium that enabled Hossein to work with industry leaders such as Telecom Italia Research, Telefonica (Spain), Appear Networks (Stockholm) and SINTEF (Norway). Hossein is the recipient of ORION Innovation Award, Isadore Sharp Outstanding Graduate Award, an OCE International Scholarship,, Apple Inc. student scholarship, and in 2008, he was a semi-finalist for the business plan competition at Harvard Business School. Hossein has more than 18 publications and patents on Ubiquitous and Pervasive Computing. Prior to starting his doctoral studies at Toronto Metropolitan, Hossein was the VP of Research and Innovation at Appear Networks in Sweden and prior to that a Mobile Applications Architect at Primus Telecommunications in London, England. In August 2012 it was announced that Rahnama was recognized as part of MIT's Technology Review magazine's annual list of the world's top innovators under the age of 35. He was distinguished for his work in context-aware and cloud computing platforms that can provide relevant information to mobile users while giving them full control on their privacy. Rahnama was selected as a member of the 2012 TR35 by a panel of expert judges and the editorial staff of Technology Review, who evaluated more than 250 nominations from around the world.