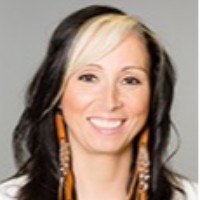 Pamela Palmater is a Mi’kmaq lawyer whose family originates from the Eel River Bar First Nation in northern New Brunswick. She is currently an Associate Professor in the Department of Politics and Public Administration at Toronto Metropolitan University (formerly Ryerson). In addition to her facu...

Pamela Palmater completed her Doctorate in the Science of Law (JSD) at Dalhousie University Law Faculty in 2009. Her thesis is entitled: Beyond Blood: Rethinking Aboriginal Identity and Belonging. In addition, she holds a Master in Laws (LLM) from Dalhousie University in Aboriginal Law, a Bachelor of Laws (LLB) at the University of New Brunswick, and a Bachelor of Arts (BA) with a double major in Native Studies and History from St. Thomas University in New Brunswick. She was called to the bar in New Brunswick in 1998 and is a member of the Law Society of New Brunswick, the Canadian Bar Association and the Indigenous Bar Association. She has worked for the federal government on Aboriginal issues for over 10 years. Her position as a lawyer at Justice Canada involved various legal matters pertaining to First Nations. She has also held several positions as Director at Indian and Northern Affairs, managing treaties, claims, self-government, land and registration portfolios. She has also worked and/or volunteered with national and provincial Aboriginal organisations and communities.

Dr. Palmater’s areas of teaching expertise and interest include Aboriginal Governance and Justice; Comparative Indigenous Studies; Human Rights (both domestic and international); and Constitutional Law (including the Canadian Charter of Rights and Freedoms), and she can supervise students who wish to undertake independent studies, Masters or doctoral studies in research areas relating to Aboriginal peoples.

Her current research interests relate to Aboriginal Governance matters, specifically how land and natural resources, treaties and Aboriginal rights, jurisdiction and law-making powers and citizenship and identity issues can contribute to stronger Aboriginal families, communities, organisations and Nations. A key part of this research is the ever-changing political structures and relationships within and between Aboriginal communities, their relationships with the state and on the international stage. She is interested in partnering with Aboriginal organisations and communities to conduct further research in these areas. Recognising her as "... a trailblazing role model for young Indigenous women, planting seeds of change that are transforming Indigenous communities across Canada,” the YWCA named her a Woman of Distinction in the Social Justice category for 2012. Click here for the citation. On 29 October 2012, Dr. Palmater was inducted into the Bertha Wilson Honour Society by Kim Brooks, Dean, Schulich School of Law, Dalhousie University. Click here for photos.